D.I.D's VX Series boasts a much longer chain life than the VO-Ring Series due to the patented X-Ring technology. The 520VX3 has a 32% longer chain life than the 520VO and the 525 and 530VX3 has a 41% longer chain life!
In developing the Pro-Street VX Series, D.I.D focused on improving chain “Rigidity”. Traditionally, “Tensile Strength” has been used to measure the strength of a chain. But Tensile Strength is only a laboratory measurement of a chain’s “breaking point”. Rigidity increases a chain's ability to withstand forces that occur in a rider’s real world experience. Rigidity increases power transfer from the engine to the ground and greater resistance to stretching under load. This translates into smooth handling and quicker response time. 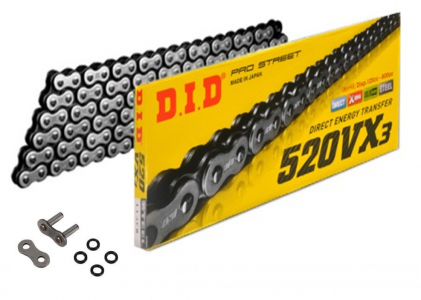